It premiered at Lincoln Center in Manhattan, New York on May 14.

South Africa-based Zoe, who is also a multimedia journalist, is doing very well in the industry as her film productions have made waves overseas.

Its production, To The Plate, was shortlisted for the BAFTA Student Film Awards last year. Another, It Takes A Circus on which she worked alongside directors Gopika Ajan and Annick Laurent was a finalist at the 48th Student Academy Awards (Oscars).

She had just returned home to Cape Town from the UK.

During the interview, she explained how she was able to use cinema as a source of happiness.

The inspiration to focus on filmmaking, Zoe, who was born in Bulawayo and raised in Harare, said was a result of the motivation she received from her father.

“I knew I wanted to do something that would impact the people around me. 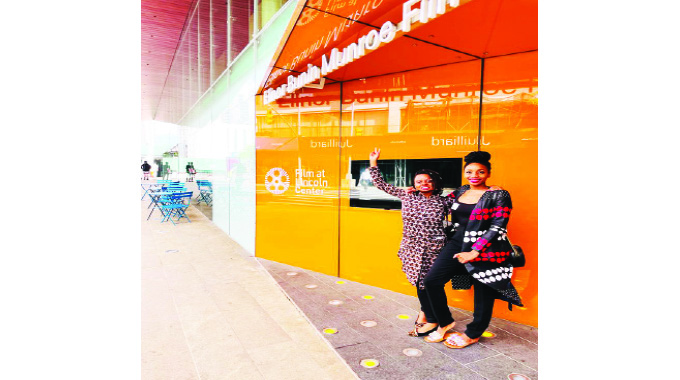 Zoe and a friend at the African Film Festival venue

I’ve always loved books, but realized that movies and TV were more accessible mediums to talk to the average person,” Zoe said.

“My first project was a film called My Perfect Date which was shot in Harare in 2015.

It was a reality TV series that I shot in Zimbabwe using my aunt’s newly renovated kitchen.

I got my local butcher and Spar to sponsor the project and that’s how we got the project off the ground,” said Zoe.

She said premiering her film on an international stage was a dream come true as she gave details of a real event.

“The film is called Intelligent or Botlhale, the direct translation.

It is the name of the main character of the film and the name was chosen by the director of the film, my business partner Rea Moeti. The friends plan a getaway to a fast food joint, where they will live out their fantasies of being high society people, but their day of escape is met with the closure of their institution.

Their lives collide with tragedy and death.

“The story is fictional, but based on the real crisis that occurred at Life Esidemeni (a tragedy that resulted in the death of 144 people in mental institutions in Gauteng Province due to reasons such as starvation and negligence),” Zoe said.

Reflecting on her film career, Zoe said breaking into the industry was no picnic.

“It’s a fairly closed network of professionals who know each other and continue to work together from project to project, so it can be difficult to break into it.

It’s also not the most lucrative when you’re just starting out.

Many people either have to supplement by doing random odd jobs or change careers altogether in order to keep the lights on.

“However, once you have a sustainable revenue model and a good pipeline of projects, the heights are really high.

Creation is a pure act of will and there is nothing better than seeing something that only existed in your mind come to life and be enjoyed by others,” she said.

Zoe said one of the challenges she’s faced as a “young woman of color” is being repeatedly boxed into the “emerging filmmaker” category.

“We emerge forever and have never ‘arrived’.

The labels aren’t the problem, it’s the budgets that come with the label.

But ultimately, your work speaks for itself and I also believe that God’s grace sets you apart.

“I believe I did my part because I was nominated for the Student Oscars. I was also selected as a Reuters Fellow at Oxford University,” Zoe said.

As someone who has excelled in the industry, Zoe advised up-and-coming film practitioners to be optimistic in their work, which she does as she works on upcoming projects.

“Find your tribe of like-minded individuals, then start doing whatever you can on set.

I learned to serve in my church, His Presence Ministries International, and to be helpful, willing, and available to do the jobs no one wants to do. It’s what gets you noticed and it’s what drives you far.

Regarding her plans for this year, Zoe said she is producing two feature films, one for M-net and another for Netflix.

Highly scholarly, Zoe holds an undergraduate – BA Honors in Law from Wits, an Honors and Master of Arts in African Literature and Cinema from Wits and a Master of Science in Journalism specializing in documentary filmmaking from Columbia University in New York City.

She is the third daughter of Apostle Charles (late) and Commissioner Petunia Chiriseri, both from Bulawayo. The 32-year-old is married to Herbert Ramushu.

Zoe, who has featured in various advertisements in South Africa featuring international brands such as KFC, Grandpa and Soul Candi, runs her own production company, Chiriseri Studios.

She is a member of the Cannes Producers Network and The Gotham (formerly IFP).

She has enjoyed success in various markets, including her series Pretty Hustle, which was selected as the first and only episodic project to be featured at DFM’s Financial Forum.

She chairs the South Africa Department of Arts and Culture Committee and is a 2021 Fellow of the Reuters Institute at the University of Oxford.

So far, his work has been recognized on global platforms such as Berlinale, Cannes, Morocco Film Festivals and has been featured in Glamor and Variety magazines.

Before becoming a filmmaker and multimedia journalist, Zoe studied and worked in the legal field.

She was an integral part of the team that prepared the 2018 Framing The Shot: Key Trends in African Film report, the leading analysis of African cinema, with the Goethe Institut and the German Foreign Office.

Previous Literary Arts Festival will showcase the community that comes together to celebrate reading
Next Books: Missing Bridgerton? So why not take A Lady’s Guide To Fortune-Hunting…