DC Comics Detective Comics #38 features the origin and first appearance of Batman’s trusted sidekick Robin, The Boy Wonder. It is rated CGC 3.0 (estimated between $20,000 and $30,000). 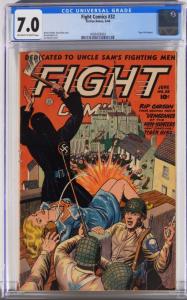 Henry Anderson grew up in the Edgewood neighborhood of Cranston, Rhode Island, where he bought comic books at the local drug store on Broad Street – 160 in all.

The auction will take place online and in the Bruneau & Co. gallery. Born in 1931, Henry Anderson grew up in the Edgewood neighborhood of Cranston, RI, where he purchased comic books from the local drug store on Broad Street. From 1938 to 1947 he collected 163 comic books published by DC Comics, Dell, Fawcett, Fiction House, Harvey and others.

Henry was primarily drawn to military comics, having turned nine at the start of World War II in Europe. Of all the titles he collected, he most followed Fiction House Jumbo Comics and Wings Comics. However, he also dabbled in superhero titles, including DC Comics Batman, Detective Comics, Flash, Superman, and Wonder Woman.

As he grew older, comic books became a collectible from his past as he took up stamp collecting with his father, a hobby he pursued throughout his life. While Henry was actively buying stamps, his comics sat safe in two tins since 1947, until they were entrusted to Bruneau & Co. Auctioneers by his family earlier this year.

The copy of DC Comics Detective Comics #38 features the origin and first appearance of Batman’s trusty sidekick Robin, The Boy Wonder. It is rated CGC 3.0, one of nine with this grade and only 34 known examples are rated higher. It is ranked #24 on Overstreet’s list of the 100 Best Golden Age Comics and is expected to fetch between $20,000 and $30,000.

Batman will make several appearances throughout the day. Here are some highlights:

Let’s not forget that the Man of Steel will also be represented in the sale. A copy of DC Comics Superman #4 (Spring 1940), featuring Lex Luthor’s second appearance, is set to leave theaters for $2,000 to $4,000. The comic is rated CGC 4.0, one of only 18 with this rating in the CGC census and with 90 known copies rated higher by CGC.

Mr. Anderson was a huge fan of the Fiction House comics, and there are many fine examples in the sale. A copy of Fiction House Fight Comics #39 (August 1945), featuring a smoking gun cover featuring Joe Doolin’s Senorita Rio, one of the finest copies in existence, rated CGC 9.4 (one of three; only one is rated higher by CGC), should fetch between $2,000 and $4,000.

Internet auctions will be facilitated by LiveAuctioneers.com, Invaluable.com, bidLIVE.Bruneauandco.com and the “Bruneau & Co” mobile application. on iTunes or Google Play.


EIN Presswire’s priority is source transparency. We don’t allow opaque clients and our editors try to be careful not to weed out false and misleading content. As a user, if you see something we missed, please bring it to our attention. Your help is welcome. EIN Presswire, Everyone’s Internet News Presswire™, attempts to define some of the boundaries that are reasonable in today’s world. Please see our editorial guidelines for more information.

Previous Megacity Review™ (MCR), a literary arts journal for underrepresented voices, is launching its first writing contest.
Next 5 New Books About Growing Up Like A Pro