Samaritans have lived in the Land of Israel for 3,600 years. Some may be familiar with references to them in the New Testament, but few know who they really are.

A new multi-faceted project of Yeshiva University Center for Israel Studies introduces the Samaritans to a wide and varied audience and explores how they managed to survive for millennia despite the efforts of conquering powers to obliterate them. Basically, the project asks how the Samaritans plan to continue surviving in the future when there are only 862 of them today.

The Samaritans are a distinct religious group descended from the northern tribes of biblical Israel, specifically the tribes of Ephraim, Menashe, and Levi. They are not – and never have been – Jews, Muslims or Christians. They hold both Israeli and Palestinian nationality.

“Our programs and projects are about studying Israel in all its incredible complexity. You can’t get more complex than the Samaritans,” the historian said. Dr Steven FineDirector of the Center for Israel Studies.

The Samaritans Project presents a book of academic essays, a feature documentary and an exhibition at Bible Museum in Washington, DC. All three share the same title: “The Samaritans: A Biblical People.” A samaritan cookbook and works of art created through a collaboration with the Jewish Art Fair are also part of the project.

The film, from the Israeli director and producer Moshe AlafiUS premieres indoors and live at Other Israeli Film Festival in New York on November 8. A premiere in Israel will follow on December 17 at the Jerusalem Film Festival.

“People find it amazing that there are non-Jewish Israelites. It is difficult to understand the fact that these people keep all the Torah commandments, yet they are not Jews,” Fine told The Times of Israel.

Edited by Fine of Yeshiva University, the scholar book is illustrated with high-quality photographs of archaeological and archival finds, and of Samaritan life in the past and present. His 24 scholarly essays cover many topics, including the historical Samaritan-Jewish split, early Christianity and the Samaritans, Muslim encounter with Samaritans, and Samaritans in modern Israel.

“The Samaritans have always been a ghost people next door. A significant amount of scholarship and archaeological literature about them only began to emerge in the 1980s,” Fine said.

The Samaritans have always been a ghost people on the side

The support of the Samaritans by early European Zionists and Jewish leaders in the Land of Israel was essential to the survival of the Samaritans in the 19th and early 20th centuries. A test of Dr Katharina E. Keim about the rabbi, scholar and folklorist Moses Gaster highlights his relationship (mostly by correspondence) with the Samaritans. He emphasizes the importance this had in terms of legitimizing their identity and their historical ties to the Jews.

“The Samaritans: A Biblical People,” edited by Steven Fine. (Brill)

A test of Dr Reuven Gafni cites a critical letter sent by Rabbi Ḥayyim Abraham (Mircado) Gagin, then Chief Rabbi of Jerusalem, to the Ottoman authorities in 1842, when the Samaritan community in Nablus was threatened with extinction. In it he “decreed that the Samaritans should be regarded as ‘a branch of the children of Israel, who recognize the truth of the Torah'”.

“This assertion made by the Jewish Chief Rabbi…may with some certainty have had far-reaching consequences, both in terms of protecting the Samaritan community of Nablus from immediate harm and, to some extent, in terms of shaping the social relations. and mutual perceptions between the city’s Samaritan and Jewish minority communities over the following decades,” Gafni writes.

“The Jews essentially saved the Samaritans and changed the relationship between the two communities — made them more positive — after three and a half millennia of enmity,” Fine said.

Cooperation between the Samaritans (who traditionally base themselves on their holy Mount Gerizim above Nablus) and the second Israeli president Yitzhak Ben-Zvi led to the integration of the Samaritans into Israeli society and the creation of a Samaritan community in Holon, south of Tel Aviv.

According to the chief curator of the Museum of the Bible Dr. Jeffrey Kloha, an exhibit on the Samaritans fits well with the museum’s mission to explore biblical history, manuscript traditions, and the impact the Bible had on different groups. The partnership with Yeshiva University brought together different areas of expertise and backgrounds. 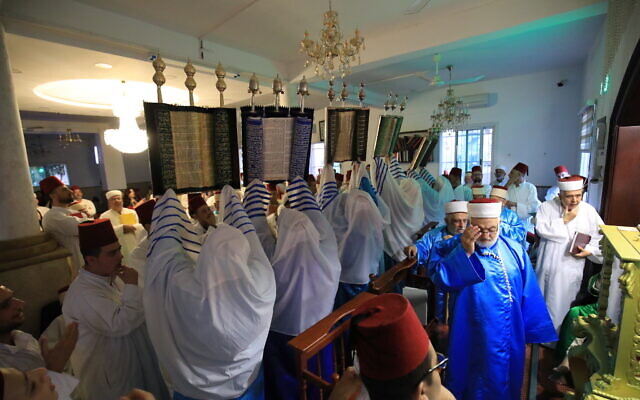 Samaritans during prayer in the synagogue of Kiriyat Luza. (Ori Orhof/Courtesy of the Museum of the Bible)

The exposure includes historical background, ancient manuscripts, and archaeological artifacts from the Land of Israel, as well as parts of Europe and Asia where Samaritan communities existed at various times in history before disappearing. However, the remaining Samaritans and the way they live today in Kiryat Luza (on Mount Gerizim) and Holon come to the fore.

“It was important to represent the people well. Our goal is to tell the story of the Samaritans as they would tell it, because that is what produced the community as it is today and as they pass it on,” Kloha said.

Through the videos and other installations, visitors are introduced to the Samaritan Torah, which is written in an ancient script known as Paleo-Hebrew. The Samaritan Torah is similar to a version found in Qumran and used by Jews during the Second Temple period. It is largely the same as the Jewish Torah, the main difference being the tenth Samaritan commandment calling for the building of an altar and the performance of sacrifices on Mount Gerizim. (The Samaritans built a temple to God on Mount Gerizim in the 5th century BCE. The Temple Mount in Jerusalem is not considered holy by the Samaritans). 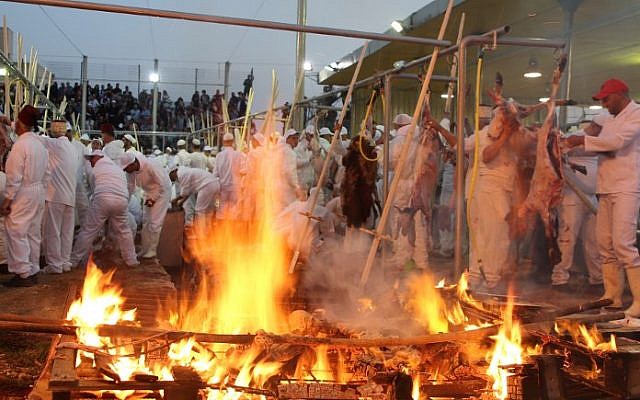 Samaritans take part in the traditional Passover sacrifice ceremony, in which sheep and goats are slaughtered, at Mount Gerizim near the northern West Bank city of Nablus on April 29, 2018. (AFP )

At Passover, the Samaritans literally replicate the biblical sacrifice by slaughtering large numbers of sheep and goats and burning them in pits. After branding themselves with the blood of animals, the community eats the meat by hand with bitter herbs, as it is ordered.

Since the Samaritans, who are led by a high priest rather than rabbis, evolved separately from Judaism, they have distinct traditions and different interpretations of Torah law. For example, Samaritan women spend their periods completely separate from everyone else. They stay in a designated room, use a separate bathroom, and have food brought to them rather than cooking for others.

A Samaritan mezuzah is a large inscribed stone slab placed above the front door of a house, rather than a small, narrow box containing scriptures attached to the door frame. Samaritan couples do not stand under a hoppa at their wedding. 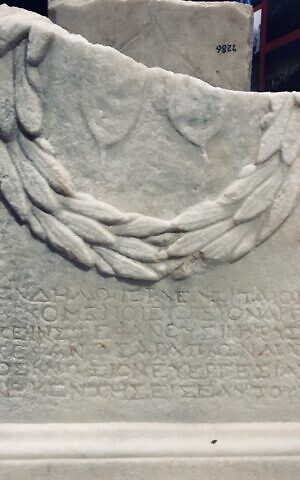 “How to put the Bible in everyday life, in an everyday context, is something that everyone struggles with. The Samaritans are an example for people to reflect on,” Kloha said.

Alafi’s powerful film focuses on the most pressing issue for the Samaritans – physical survival. They are all extremely worried, but they disagree on how to ensure not only survival but also growth. It is a painful situation for a people who claim they were once a million.

Some are in favor of bringing in new blood (literally, because there is only four family lines among the Samaritans) to expand the gene pool and ensure that every young member of the community can marry the person of their choice.

Alafi devotes much of the film to the relationship between a young Samaritan named Shadi and his new Ukrainian wife Natasha, who is trying to adjust to a new environment and a very different way of life.

“There are currently 30 Ukrainian women who have married in the community. It is definitely changing, but I think it is a win-win situation for Samaritan men and Ukrainian women,” Alafi said.

Others strongly oppose this trend and insist on continuing the long-standing tradition of marriage, despite the obvious genetic risks.

The film shows the Samaritan historian and community emissary Benjamin Tzedeka trying to convince the high priest and his wife that they should consider bringing a large group of Brazilians to Israel who have expressed a sincere interest in the Samaritan religion and way of life. He suggests that they could live separately from the community until they have learned and proven themselves. The high priest and his wife are not enthusiastic about the idea.

Alafi, who spent six years making the film, said he deliberately left out topics such as how Samaritans might deal with modern issues like homosexuality or vegetarianism. Nor did he explicitly address the dangers of endogamy. 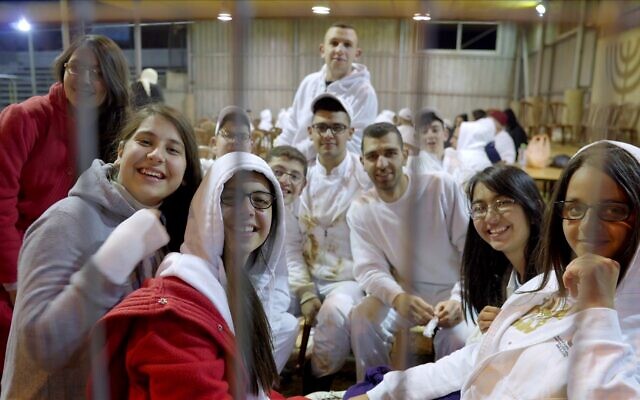 “They are a people who live on the border between an ancient civilization and a mixture of complex modern geopolitical problems. I think it’s much more interesting to focus on that,” the filmmaker said.

Kloha said a significant part of the exhibit at the Museum of the Bible deals with how Christians, Muslims and Jews have interacted with Samaritans throughout history.

Relations between Jews and Samaritans have been negative for thousands of years and only improved relatively recently. Alafi suggested that this can be attributed to the ability to connect with sincerity and appreciation with someone “who is me but not me”. Fine of Yeshiva University thinks this idea can be applied more broadly.

“Socially, it is important for the Jewish world – and for others – to deal with people who are very similar to them and not to hate them for it. Samaritans is a safe place to think about this skill building. We need to connect with other people and groups about what we share and what we agree on, and put our differences in a box,” he said.

Previous Kamila Shamsie Q&A: “Ali Smith’s books force me out of pessimism”
Next The next chapter in children’s picture books